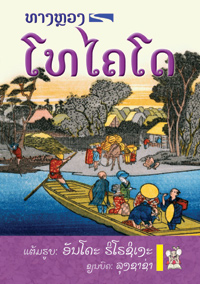 For hundreds of years, the Tokaido road was a critical highway connecting Japan's most important cities: Kyoto, home of the imperial emperor; and Edo (now Tokyo), home of the powerful shogun.

In 1832, the artist Ando Hiroshige traveled along this road, and created a series of 55 colorful woodcuts depicting the journey. Most artists of that era focused on religion, rulers, and rich people. Hiroshige focused on ordinary people. In an age without movies or television, his prints offered a different sort of entertainment. They cemented his reputation as one of Japan's premier artists.

Today, they give us a glimpse of life in Japan, nearly two centuries ago. For this book, we've selected some of the best, and used them as a backdrop to write about Japanese culture and customs, as well as highlighting Hiroshige's artistic techniques.