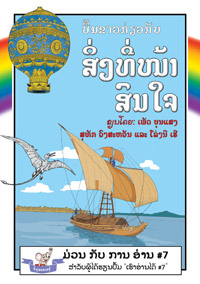 The White Book of Interesting Facts

We've created many fun and very easy books for new readers. Often, however, these children have reached late primary school, or middle school, and are eager for different content than a 6-year-old would want.

Here are facts and pictures about a fascinating variety of topics, from ancient Egypt to dinosaurs to boats of the Pacific Islands. They were written for someone who has just learned the last letters taught in our "I Can Read!" series, and offer many words that include those letters.