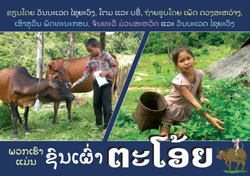 The Ta-Oy are one the ethnic minorities in Laos, with some 30,000 people in southern Laos, mostly in a single district that is also called Ta-Oy. Large photographs and brief captions tell about two Ta-Oy children and their families as they do household chores, gather food, and play with friends.

While it will be enjoyed by many ages and ethnic groups, this book is particularly intended to help young Ta-Oy children who don't use the Lao language in their home, as they enter school and learn to read and speak Lao.